By Jonathan Deutsch in Tutorial

The goal of this article is to show how to create a rich media advertisement with Tumult Hype. It covers the basics of using the app in the context of building an ad and discusses ad-specific tips and tricks. By the end of reading you’ll be able to make HTML5 ads quickly and beautifully!

The Rise of HTML5 Ads

It is well known that adding animation and interactivity in digital advertising makes ads more effective. Beyond catching visitors’ eyes, rich media ads can better convey the product or branding as well as add engagements leading to more clicks.

As rich media ads are visual in nature, it makes sense to build them using visual tools. Changes are seen immediately. Adobe’s Flash reigned as king of the visual ad creation tools for years, but has been toppled by HTML5’s compatibility on mobile devices. As a technology, HTML5 ads have the additional advantage of often being more accessible while having lower power requirements. But HTML5 itself is just a markup language and has no inherently included visual tools, as Flash did with the Flash Professional app. Building ads via hand coding would be a laboriously slow process. Luckily, there are now sophisticated visual tools that can output HTML5.

Tumult Hype is the leading HTML5 animation and interactivity app for macOS. Hype’s raison d’etre is to be easy to use and quick to learn. Layout is similar to Keynote, and per-property animation keyframes can be automatically created with its quick “Record” functionality. Hype provides a powerful set of animation features, such as animation along curved motion paths, customizable easings/timing functions, simultaneously running timelines, and encapsulated reusable symbols. Coding is not required for most common interactivity, although JavaScript actions can extend its capabilities by integrating with other libraries and services.

While Tumult Hype can be used for a wide range of HTML5 content, it is especially capable for rich media ad creation. A plug-in system, called “Export Scripts”, can integrate ad platform features and help package its export output for delivery. Advanced Export functionality can further help automate export tasks. Hype’s runtime library is very small with a compressed size of 25KB, giving plenty of room for your assets. This runtime drives the animations and manages browser compatibility issues (though the app still gives warnings if a feature won’t work on specific browsers).

Step zero is to download Tumult Hype. The trial is fully functional for 14 days. Tumult Hype has two flavor modes: Standard and Professional. For ad creation (and following along with this article!), you’ll want to use Hype Professional.

You can then optionally grab an Export Script, which will augment Hype with extra ad-related features. Currently there are scripts for Sizmek, DoubleClick Studio, and DoubleClick Campaign Manager. If you are using a different ad platform, the steps are usually straightforward to adapt the standard output.

You can verify an Export Script has been installed by looking within Hype’s Preferences. Export Scripts may also have options that are show in the Document Inspector. 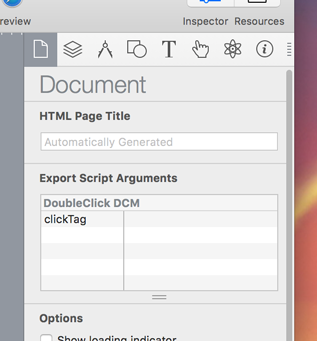 After launching Hype, you’ll want to set the scene size to match the ad you are creating. This can be done in the Scene Inspector by setting the width and height, or choosing one of the Preset Sizes. Hype contains presets for common ads banners and rectangles.

If your ad will have different size representations, you could make use of the Responsive Layout and Flexible Layout systems. Responsive Layout allows different content that is shown on width-based breakpoints. They can later be individually exported. The Flexible Layout system will adjust element positions and sizes based on container dimensions.

Tumult Hype has basic shape and text primitives, but it is most likely you’ll be importing image assets from another program like Photoshop, Illustrator, or Sketch. These can simply be dragged to the scene editor or added via the Insert… menu item. Hype keeps a copy of the assets but will ask to update if it notices changes on the original to help when iterating.

You can later find assets in the Resource Library. One of the options here is to Automatically optimize when exporting. This feature is enabled by default and automates a few tasks:

While this is generally useful, it may work against file size goals for your ad. For example, overall ad file size is usually measured from the zip and not actual contents downloaded — as such having both retina and non-retina variants will add weight. Also you may be able to do better at visual compression quality or size than Hype can do in an automated fashion (using a tool like ImageOptim). You may need to uncheck this box.

Regardless, bitmap-based assets can add up fast. You may want to consider using SVGs, which are widely supported by browsers. Hype treats these as images, yet won’t attempt to optimize them.

As a side note, IAB recommends no more than 15 initially loaded assets to help keep pages lean.

Once elements have been created by dragging in assets or inserting text/shapes, they can be animated easily with these steps:

Recording is a UI shortcut for adding per-property keyframes. You can always manually create or edit them. This includes changing their timing functions to different easings or effects like elasticity and bounce-back. Position animations can be further refined by dragging a motion path to be shaped into curves.

A timeline in Hype can be thought of as a stream of animations. A scene in Hype always has at least one timeline — the Main Timeline. Multiple timelines can be created and run in parallel. This is often useful to animate specific elements in response to actions, or to maintain looping.

Symbols can play a similar role – they represent reusable “scenes within a scene” and contain their own elements and independently running timeline animations. Like other apps with Symbols, a change in one instance will be reflected in all other instances.

The beauty of choosing HTML5 over a video/animated GIF is that it allows for interactivity and engagement with users. Interactivity is a response to an event. These events could be mouse clicks, drags, swipes, scene loads, waypoint hits, or even key presses. The action response depends on the goals of the creative. You may want to kickoff animations, bind animations to a drag, change scenes, or even trigger custom code. Within the realm of ads, typical tasks would be having a button click go to an external URL (also called an “Exit”) or triggering counters that can be reported back to the ad server.

Interactivity can be created without the need for code in most cases. These are the basic steps for running an animation in response to a mouse click:

Export Scripts also can provide ad-specific actions that can be chosen in response to events. These will appear in the same Action popup list.

Additionally, the Run JavaScript… action can be used for any custom code, including invoking ad-related functions or calling the Hype API.

It is important to preview an ad frequently while building to ensure that final animations and interactivity behave as you intend. The Preview menu allows for quickly changing between different browsers on your computer. If you hold down the option key, you can preview the specific scene/layout that is currently selected in Hype. Hype can also preview to an iOS device using the free Hype Reflect app.

Once your ad is complete, you’ll want to export for final delivery. The File > Export as HTML5 menu contains the Folder… option, which produced the default  .html page and corresponding folder of resources. This menu also provides any Export Script-provided options. These will automate packaging, generally stripping unnecessary resources and compressing to a single .zip file.

For further automation, you may want to use the File > Advanced Export… tool. This can split an ad into specific scenes or layouts, and also make use Export Scripts.  File > Export as Movie provides some static image/video options if need be, too.

Those are the primary steps for creating a rich media HTML5 ad with Tumult Hype! As a visual tool, Hype can significantly speed up the creation and iteration process without limiting in features or functionality. The ad-specific workflow features in Export Scripts automate many common tasks for digital ad production. These Export Scripts can be built or modified by anyone, so if there’s an ad system or automation that doesn’t exist you are free to build it!

If you’re interested in learning more, there’s documentation and tutorials on the Tumult site. Hype is available for a 14-day fully functional trial and costs $99.99 USD for the full Professional version.